Bryce Boltzmann is the main protagonist, and a demon hunter who holds an evil eye hired by NADA. He used to be a demon hunter who served justice and opposed the demons, but after the defeat against the demon king, the loss of his wife and rendered immortal, he has spent the past 500 years in despair. His Immortality due to the demon king putting a curse on him dooming him to an eternity of despair

This article is a stub. You can help Never Dead Wiki by expanding it.

Bryce first appears beside his wife Cypher, challenging Sangria in the name of his honor as a demon hunter and that of his family. The demon states that his soul has a shade of salmon pink, and explains his kind is capable of tasting the color of the human soul. Bryce attacks Sangria, and a fierce battle is started, in which the demon hunter defeats his foe. 500 years later, the now immortal Bryce is awakened by his cellphone, which marks the 5th missed call from his newest partner Arcadia Maximille. After admiring the billboard for pop star Nikki Summerfield's single, "Pharaoh Love", he lays on his bed, at which point Arcadia shoots through the door's lock, one of the bullets hitting Bryce in the head, and walks in, telling him to wake up and kicking a bottle of beer to him. As the two walk out of Bryce's apartment, he asks for his payment, at which she reminds him of the bill he had racked up in the last mission by destroying the fire department's entrance.

They arrive at an abandoned mental asylum, where a certain couple had reported a monster's appearance, against which the police had no effect. As the two of them proceed through the asylum, Bryce and Arcadia fight puppies and spoons, arriving at a spot in which the monster mentioned earlier is seen. According to Arcadia, it's a swordpig, and Bryce states they should go after them, but the demon hunters are attacked by spoons and puppies, as well as wombs. After entering the building in which the swordpig was seen, grandbabies are introduced, and Bryce fights his way into the elevator that takes the demon hunters into the area from which the demon's reading was originating from. In the area, the boss, called "Sword Pig" is fought and defeated. Sword Pig survives its defeat, attacking Arcadia before Bryce could react, but she is saved by the arrival of fellow NADA agent Alex, who uses his knives to finish the demon. When asked about his new partner, Alex states that he had been hit by a stray knife and died, at which Bryce is surprised that it was the third time he had "unintentionally" killed a partner. It is revealed that Alex was also an immortal, and that Bryce's blood had curative features. The two then leave the asylum.

In the NADA headquarters, Bryce and Arcadia are praised by their boss Sullivan, when the latter receives a call, telling the duo that more demons were spotted at the museum where Nikki Summerfield was about to perform. The demon hunters fight their way into the museum's grounds after realizing the main exit was blocked, planning on rescuing the civilians who were still trapped with the demons in there. The birdies are introduced briefly after the courtyard battle against known lesser demons, and Bryce uses his abilities to get inside the building, where Arcadia was waiting for him after using a side entrance. After some fighting, Arcadia warns Bryce of an inflator, and yet another battle starts at the main hall in Block 1. According to the NADA intelligence, the large demon was wreaking havoc in Block 4, and the demon hunters head there. Bryce then encounters the inflator, fighting it as a miniboss in order to protect human survivors. He then fights his way through the aquatic exposition, arriving at Block 5. In there, Bryce finds Nikki trying to defend herself against puppies, saving her by quickly disposing of the lesser demons and engaging a new wave of spoons. Bryce locks Nikki into a decorative sarcophagus, stating he would come back for her once he was done, and gets back on his path to Block 4. At Block 3's Egyptian exposition, Bryce fights more demons, and another type of enemy is introduced, the armored puppy, fought as another miniboss.

In Block 4, Sangria is seen scolding his subordinates for attacking it, as he had ordered them to focus on Block 5, revealing that they were in fact after Nikki, leaving the place as he didn't wanted Asmodai to take all the credit for their mission. Bryce engages Quad Jaw in a boss fight, being thrown through the wall and back into Block 1. After the boss fight, a bit more of Sangria, Bryce and Cypher's fight 500 years ago is revealed, as the demon hunters defeat him and cut his finger off, prompting him to run away, followed by the couple. Back to the present, Bryce releases Nikki, who threatens to sue him in disbelief, as she thought someone as famous as her would never have to go through anything like that. Bryce takes her to the police department, stating that he's with OPHS and telling them that Nikki was a thief whom he had caught stealing his wallet, likely to give her a lesson, watching as the officers searched her pockets. The demon hunter had planted his wallet in her pockets, leaving her at the hands of the policemen, at which she ironically curses him for eternity.

Another bit of Bryce's past is uncovered, as he and Cypher arrive at the center of Astaroth's lair, where it is revealed that the demon had been interacting with humans for at least 2 000 years. Astaroth warns the demon hunters that, in Cypher's current condition, they stood no chance against him, and that he had plans for her, giving the couple a last chance to surrender, at which the medium states they would get killed anyway. With his Butterfly Blade enchanted by Cypher, Bryce confronts Astaroth, and the flashback ends. In the present, Bryce smokes and drinks at a bar, watching the news that several explosions ravaged the second floor of Precint 21 (Nikki's current location). It doesn't take long for him to receive a call from Arcadia, who tells him to meet her at the police station. Once at Precint 21, the demon hunters fight their way inside the building, avoiding the fires that burn it at a fast rate. After much fighting against waves of lesser demons, the duo manages to switch the station's power on, going down to the underground floors and searching for Nikki there. They find her locked up after most of the police force had ran off, starting the search for a control for the cells and freeing the singer. She is surrounded by puppies, having a cellphone tossed at by Arcadia and told by Bryce to run, at which she complies after noticing it was either that or facing the demons.

In the unmanned train station, the running Nikki is ambushed and faces the Panda Bear, being rescued by Bryce and Arcadia. The demon is defeated in a boss fight, and the path to Nikki is blocked by a train, which the demon hunters need to move. After moving the train, many birdies attack Bryce and Arcadia, soon joined by more lesser enemies. After fighting their way through the hordes of enemies on the rails, they arrive at Nikki's location, fighting a new wave of demons. Bryce jumps onto the elevator Nikki was on, causing it to collapse with the two in it and causing an explosion.

Having lived for over 500 years ago he has learned much about fighting. Most obvious has been that he has learned to take advantage of his immortality. He has learned, how so far hasn't been explained, that he is able to lose a limb and then retrieve it later; even to the point he can have said limb blown up and still be retrievable. Videos have shown him being blown completely apart and still retaining the ability to roll his head around collecting his body parts and having them join together in the normal way once he has them all. At this time it is unknown if he can put together in a way other then the normal way a body goes together. He is able to pull parts of his body off himself to throw, whether this is due to strength or part of the curse is unknown. He does not even eat anymore, as stated by Arcadia.

Due to his immortality his abilities range from immunity to damage and dismemberment (he however feels slight pain), superhuman strength, superhuman reaction speeds (6th Sense Upgrade) the ability to absorb electricity, fire and other elements for use against demons or to solve puzzles/ open doors and extreme regeneration. When Bryce further upgrades himself his abilities increase ten-fold allowing to sprint faster and jump higher, infuse his bullets with the element on his body (e.g. his body is on fire, he shoots out fiery bullets), and even heal allies by shooting them with his own bullets which are presumed to be coated with his immortal blood. Bryce also carries around miscellaneous equipment such as flashlights and a small defibrillator to revive his teammates and civilians if they are downed. His sword is also made of a legendary metal which can be channeled with the elements (fire and electricity) and can also damage demons in weak spots, where bullets and debris don't work.

During the beginning events of the game, Bryce was shown to be an extremely brave and noble man, willing to fight against one of the most powerful demons of the underworld for the sake of peace. However, after the death of his wife and the immortality placed upon him, he became cynical, bitter, jaded, and sarcastic in his duties, primarily lounging out in his home or at the nearest tavern drinking his sorrows away. He has a generally flippant attitude towards everything, often reacting with wisecracks and bad jokes, although this is likely a coping mechanism for the tragedy he's faced in his life. Despite his heavy cynicism, he still retains his noble and heroic characteristics, as he saved Nikki from being killed by demons and has saved Arcadia on multiple occasions (as he could have simply left them both to die and completed the mission otherwise.) Although not heavily shown in the game, it has been hinted at that Bryce suffers from severe depression and a near nihilistic view on his own life, as he can never truly be killed. The only true goal that he ever hopes to achieve is to finally die and be reunited with his wife. 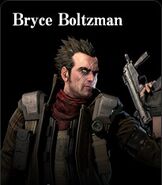 Bryce fights in a museum

A young Bryce just after being cursed

Community content is available under CC-BY-SA unless otherwise noted.
Advertisement